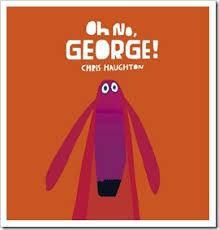 Oh No, George! is the second book (published 2012) from Chris Haughton, author of A Little Bit Lost.  It’s a bright, cheery looking story, and our version is a board book – unusually a matt finish board book, which although very beautiful does suffer more than usual from wear at the corners and spine.

George is the dopey looking hound on the front cover, and his friend/owner/companion is the longsuffering Harris.  The story in a nutshell is this: Harris goes out, George tries and fails to resist temptation and Harris returns to find the house a mess.  However, George feels shame for his impulsive actions and the second time he faces a choice he may make the right one.

There are two elements to this story that work well for me.  One is the acknowledgement of the temptation to do wrong.  My young toddler loves this book and has done for a while, and I think that’s because on some level, despite her obvious lack of experience with language, she understands what it feels like to want to do something so badly you can’t stop yourself even when you know it’s wrong. Particularly if that something is to eat a whole chocolate cake.

The other is the repetition of “Oh no, George!”. It’s hilarious.  I don’t think I realised it was hilarious until I read it out loud, but cram all the syllables you can muster into those three words and it’s very funny indeed.

Haughton has done a great job with George’s expressions, and despite the ostensible simplicity of the graphic design there is a degree of complexity to what you can see going through his head.

The best didactic children’s books address the issue of making mistakes and accepting imperfection without suggesting you should stop striving to be better.  Oh No, George! does this very well, particularly as it leaves poor George (and us) hanging at the end.  He’s far from perfect, but he’s trying to get better, as we all are and all should be.  That Harris accepts him as he is and is kind is a good lesson for any frustrated parent too.

Well worth getting hold of and reading.

Little Owl falls out of his nest whilst asleep, and when he bump bump bumps to the forest floor he can’t find his Mummy anywhere.  Fortunately Squirrel is on hand to find her – although not without making some fairly wide-of-the-mark suggestions first.

There is a long list of awards on the back of this admittedly very pretty picture book.  Bisto Book of the Year, the Eilis Dillon Award for  a first Children’s Book, a Booktrust Best New Illustrators Award 2011, and winner of the Association of Illustrators Children’s Book Gold Award.  The Irish Times described it as ‘A stunning literary and visual achievement’.

The quirky design is so striking that at the time of writing Little Owl is the Booktrust Twitter feed avatar.

Many others on Amazon have noticed the same problem, however: A Bit Lost is the same story (with the addition of some convivial biscuits) as Julia Donaldson’s Monkey Puzzle.  The latter is a such a rich, detailed book that it is extremely difficult for this very simple story not to be overshadowed by it.

That said, A Bit Lost is very, very subtle in its visual narrative.  Where Monkey Puzzle dazzles with words, this charms with pictures.   Squirrel’s arm stretches pointedly as he suggests potential parents; Frog’s eyes bulge comically; and when Mummy Owl is found she appears huge and inviting with outstretched wings.  The pared down text has appealed to at least one three year old (although bought for her sister) who insists on being asked ‘Is that his Mummy?’ every time so that she can call out “NO! That’s a BEAR!”  And the little cyclical joke at the end as Little Owl closes his eyes and starts to tip sideways off his perch once again makes for a tidy finish.

The similarity with Monkey Puzzle makes it difficult to shower Chris Haughton with praise for any originality (although to be fair both books seem to owe elements to PD Eastman’s ‘Are You My Mother’ from thirty years earlier) but his execution is without doubt both effective and attractive.