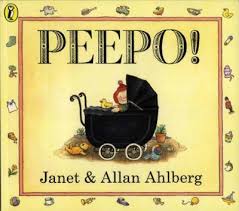 Stands in his cot,

What can he see?”

First published in 1981 this classic book is told from the perspective of a baby watching the world.  Peepo! trips along in a lilting rhythm, a simple description of what the baby sees throughout his day, but its unique feature is the hole on every other page, which allows the reader to peep through onto the next picture.  These are beautifully detailed and help to extend the potential for discussion beyond the text.  You could even echo Each Peach Pear Plum and play a finding game – there are lots of little tiny items that children could search for.  Younger ones will love simply poking their fingers through the holes. The text is fluent and a pleasure to read aloud.

“He sees a bonfire smoking,

Pigeons in the sky

A dog going by”

Some may find the old-fashioned nature of the illustrations rather strange. The book is clearly set in wartime Britain, which does seem peculiar for something written in the early 80s, but it was a shrewd move on behalf of the Ahlbergs as thirty years later it still doesn’t look dated – or at least, it appears as old-fashioned as the day it was published!  Furthermore there is a poignant undercurrent that runs throughout, from the bombed house near the park, to the pair of warbirds flying past as the baby eats his teddy, to the father in uniform putting his son to bed.

Despite the ‘peepo’ game with the pages the tone of the book is actually fairly calm, and because it goes through the child’s whole day, it ends on a note that makes it wholly appropriate for bedtime, with the baby ‘fast asleep and dreaming’.

This is a classic for a reason.  It is a pleasure to read aloud and could be enjoyed by most readers from a very young age.

Whilst searching for information about Allan Ahlberg, I came across this article in The Guardian from April last year.

It is an interesting insight into one of the most iconic figures in children’s writing, particularly given the curious twists of fate that led him there.  The books produced by the Ahlbergs have been amongst the classics for many years now and it is their originality and detail which make them such.  The holes in Peepo!, the partially concealed characters in Each Peach Pear Plum, and of course the letters in The Jolly Postman make the experience of reading each one unique and lodged them forever in the memories of those now old enough to have read them to their own children.

Ahlberg makes a good point about the interplay between text and pictures: “‘When I’m writing a picture book, I automatically think ‘I don’t need to say that’ because the pictures will say it. Or, better still, ‘I’ll say this and the pictures will say that, which contradicts it.'”  Really good picture books use their illustrations not just to reflect the words but to supplement them, develop them, evaluate them and challenge them.  Margaret Meek makes this point repeatedly in her short book on literacy “How Texts Teach What Readers Learn”, a text familiar to most English and primary school teachers.  She argues that even readers with only half a toe on the ladder to literacy can benefit and learn reading skills from picture books.  Children can learn about narrative structure simply from ‘reading’ pictures.  Raymond Briggs’ The Snowman, for example, has no words, yet the story is perfectly clear.  Pictures also offer narrative freedom, particularly in the Ahlbergs’ books, where the level of detail means the reader can chose which elements of the pictures to talk about, and what is important or otherwise to the story.  Subplots can be seen in pictures that never appear in the text.  And where the illustrations contradict the story, or include additional information, young readers begin the process of understanding subtext, ambiguity and irony.

Allan Ahlberg and his late wife clearly understood this.  Giving books to children goes beyond merely exposing them to words, bringing them enjoyment or expanding their vocabulary; it gives them access to the stuff of which narrative is made and right from the beginning of their engagement with books it helps them to develop their skills as readers.  As Meek says at the end of ‘How Texts Teach’: “the reading of stories makes skilful, powerful readers who come to understand not only the meaning but also the force of texts. It is a strong defence against being victimized by the reductive power of so-called ‘functional literacy’.  It also makes writers.”

We will return to the issue of literacy and literature another time.  For now, if you are reading picture books, think about how the words and pictures interact, and how you can interact with them.

“Once there was a pencil, a lonely, little pencil, and nothing else.  It lay there, which was nowhere in particular, for a long long time.  Then one day that little pencil made a move, shivered slightly, quivered somewhat… and began to draw.”

The pencil (drawn, naturally, in pencil) is the only thing in existence until he gets going and creates a boy, called Banjo.  Banjo asks for a dog, called Bruce.   Bruce asks for a cat, called Mildred.  Then the pencil draws a house for them to live in, and a road for the house to stand on, and a park for them to play in.  When they complain that the food they’ve asked for is black and white he draws a paintbrush, called Kitty, and together they create an entire world of people and places.

All goes well until the ungrateful characters start complaining about the way they have been drawn.  Banjo’s little sister doesn’t like her trainers. His Dad doesn’t like his ears.  To placate them, the little pencil draws a rubber, who gets on with correcting things. Unfortunately he too becomes overexcited and starts rubbing out everything that Kitty and the pencil have drawn and painted…

This is a hugely creative piece of writing and bounces off the page like an animation.  Bruce Ingman’s drawings are exactly like the pencil sketches they are supposed to be and the mix of graphite and crudely painted illustrations reflects the story perfectly.  The ‘chase’ sequence, where the pencil draws walls and cages to try and escape from the rubber, is brilliantly envisaged and cleverly executed.  Even the ‘rubbings’ from the renegade rubber are included in the printing!  The plot is surreal but absorbing and should inspire many young artists and writers; it celebrates the joy of creating your own universe.

This book would be best-received by preschoolers and school-age children who can understand the concept of drawing as narrative, and perhaps even create their own stories after reading it. It is also well worth looking out for Michael McIntyre’s reading on the CBeebies Bedtime Story.

A surreal but inspirationally creative book.